Alden has produced thousands of models over the years. Each model has a somewhat unique combination of style, shoe last,  upper leather, welt, and outsole. This combination is referenced by a model number. If you know the model number, this website can help you identify the all those characteristics of the model.

The information in this post was pulled together using information in my Alden model database and from the contributions of JSO1 over at StyleForum. See his excellent analysis here.

Location of the model number

On an Alden pair of shoes, there will be a few groupings of numbers and letters on the inside of a pair. The model number will generally be on the second line in the center. Model numbers sometimes have prefix and suffix values that provide additional information the pair. 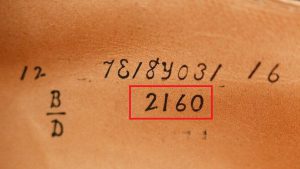 Models made for the Asian market. Two vintage Brooks Brothers Shell Cordovan models also use the “A” prefix (A764 and A765).

Models made specifically for the domestic USA market. JSO1 breaks this number down further in his post.

Collection of casual shoes made in Maine.

Pre-production pairs made by Alden. The “T” is usually followed by a two numbers which represent the year of the trial pair.

A custom pair. Generally these are boots but other styles have appeared on eBay during the past five years.

Just one example of a “Z” prefixed model has appeared on eBay (Z54321). The meaning of the Z is unclear.

The pair has a leather sole with a recessed rubber lug overlay and a lug rubber heel.

Studded rubber sole made by Dainite of the UK. The “D” also appeared on a pair of boots made for Epaulet that did not have a Dainite sole (D5836D).

The top four eyelets on a pair of boots have been replaced with hooks.

Pairs made for Eduard Meier of Germany.

Pairs that are fully or partially unlined.

The sole is sightly wider than normal.